Print: A Bookstore is proud to be working with Portland, Maine’s Poet Laureate, Linda Aldrich, to provide signed and personalized copies of her poetry. 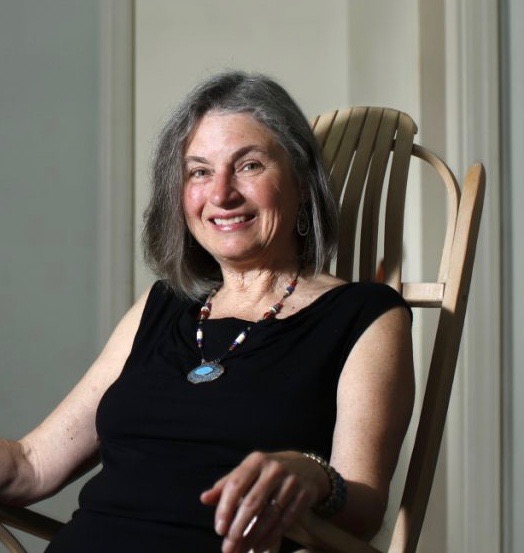 Linda Aldrich currently serves as Portland, Maine’s sixth Poet Laureate, and her third collection of poems, Ballast, has just been published by Deerbrook Editions.  She has two previous collections of poetry, Foothold (2008) and March and Mad Women (2012).  Her poems have appeared in numerous journals and anthologies, among them Indiana Review, Cimarron Review, Elixir, The Denver Quarterly, Ellipsis, The Florida Review, The Ilanot Review, Poet Lore, Third Coast, Puerto del Sol, Snake Nation Review, Words and Images, Solstice Literary Magazine, The Café Review, and Balancing Act II: An Anthology of 50 Maine Women.  Linda was awarded a Hewnoaks writing residency in 2017, and her poem “Woman-without-Arms” won the Emily Dickinson Award from Universities West Press. A graduate of Vermont College’s MFA program, she co-hosts with Marcia F. Brown the monthly reading series “Local Buzz” in Cape Elizabeth, now in its tenth year, and also the “Leaf of Voices” reading series at the Portland Public Library.

For more information about the poetry of Linda Aldrich, visit her website at https://www.lindaaldrichpoetry.com/.

The poems in Linda Aldrich’s new book Ballast are stunning and vital. Like the cardinal’s color she describes as pulsing in the darkness, these poems acknowledge the dark, but stand bright against all that would break us.  Aldrich is beautifully agile with form, whether that form is traditional or wildly inventive, as in her crown of sonnets coupled with their own erasures.  These poems bring us heartbreak and longing, but also sly humor and levity, a bench that flies, books with lives of their own, buttons tossed into the toll basket instead of coins.   Another pleasure of this book is an astute and surprising exploration of history, from Puritan New England to 1980s San Francisco, as well as the poet’s own quirky and moving family stories. The language and feeling here are rich and sure, doing the crucial work of imagination, that is, creating a ground for attention and empathy, the embrace of our shared humanity.

This third book of poems from Portland, Maine’s current Poet Laureate is the gift of an artist at the height of her powers.  A deep feeling and deep thinking poet, Linda Aldrich offers up luminous poems of awakenings over the many stages of a life: the confusions of childhood and also its sudden joys, as when effort is recognized by a beloved teacher; the thrill of living as a student abroad, being addressed by the musical mademoiselle upon entering a Paris patisserie.  A crown of sonnets and corresponding erasure poems vividly capture the self-discovery and angst of a young woman living and working in San Francisco’s theatre community as the city is ravaged by AIDS.  Upon discovering that her “twelfth great-grandmother” was hanged as a heretic, the poet fearlessly delves into the imagined heart and mind of her 17th century forebear and the harsh world around her.  Later poems radiate with the contentments of a mature, loving marriage. Like the “vigilant spider” she observes in her writer’s studio, “she assumes fragility/in a world where threads loosen, ties break.” The journey of grief through parental loss lies beneath some of the most powerful and beautiful poems in this collection, harnessing heartache into art that becomes a form of healing.  Aldrich knows well the challenge of trying to stay on balance when life conspires to unbalance us.  Her finely wrought poems are indeed Ballast  readers will turn to again and again --  for inspiration, consolation, and with gratitude.

--- Marcia F. Brown, author of In the Afternoon

With "In the Well of a Wave off Kanagawa," a prologue poem in response to a Hokusai print, the often watery world of Linda Aldrich's collection Ballast opens. From the poem's first line, "In the same boat with Hokusai," we are in the beautiful, precarious struggle of the world. This poem's ballast is Mt. Fuji, "like a rope thrown to us." For those at the mercy of the wave—all of us—"Our boat steadies," the poet writes. And so we are launched into poems full of ships, the sea and its pull, harbor cities and more: the ocean that life is.

Aboard this seagoing vessel of poems, the Ballast of the title is quarried granite. The cargo includes history, from the early and later days of this country, the paradox of family, inheritance, the awe and wonder of the natural world, love in its complexities, theater, visual art, mortality, and more. But the book's true ballast is the poet's sensibility—her voice and vision. In the ship's hold is a trunk from which an intricately woven fabric of vibrant colors is lifted and unfolded.

Each of the seven sections in Ballast opens with a sonnet, followed by the sonnet "erased"; a scrim over most of the poem reveals a thread of words from its core. As you read through the sections, you begin to see the subtle ways in which the sonnets and shadow-sonnet lines link to create a through-line.

This collection offers us the ballast that poetry is, and the poet does not look away. Aldrich's words are exquisitely chosen, brave, honest, fearless. This book is a place come to.