Print: A Bookstore is proud to be working with Maine author Gibson Fay-LeBlanc to offer signed copies of his books! 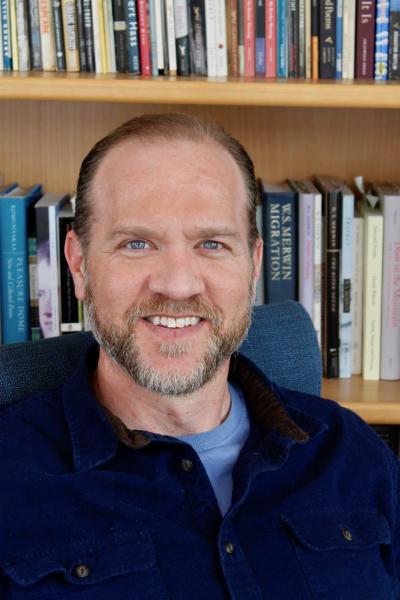 To receive copies signed by the author, place your order with Print: A Bookstore. In the order comments during check-out, please include who you would like the book signed to. For any questions, reach out to our Community Coordinator, Stephanie Heinz, at 207-536-4778 or stephanie@printbookstore.com.

Gibson Fay-LeBlanc’s first collection of poems, Death of a Ventriloquist, was chosen by Lisa Russ Spaar for the Vassar Miller Prize and published in 2012. The book received a starred review from Publishers Weekly and was featured by Poets & Writers as one of a dozen debut collections to watch. Gibson’s poems have appeared in magazines including Guernica, The New Republic, Tin House, jubilat, FIELD, and Orion. His fiction has appeared in Slice and Portland Magazine. His second book of poems, Deke Dangle Dive, was published by CavanKerry Press in 2021. With graduate degrees from UC Berkeley and Columbia University, Fay-LeBlanc has taught writing at conferences, schools and universities including Fordham, Haystack, and University of Southern Maine, and helped lead community arts organizations including The Telling Room, SPACE Gallery, Hewnoaks Artist Colony, and the Maine Writers & Publishers Alliance, where he now serves as executive director. He lives in Portland with his family.

“I don’t know what to praise more, the vivid and bracing language of the poems in Deke Dangle Dive, or sense of life that language delivers, a life fully lived and examined in all its rich complexity. Hockey is, as one poem says, a way of ‘humbling yourself to the rules of the game’ and that also goes for the making of art, and beyond that the process Keats would call soul making, acknowledging the longing, love and grief that make us human. For Gibson Fay-Leblanc that involves exploring what it means to be a husband, father, son, and to confront the serious illness of a beloved brother. If the poet knows that the form ‘can never be close enough to the actual,’ still when poems are as beautifully made, as emotionally compelling as these are, they seem to pulse with life and pass that life on to us, through words that do indeed ‘land in the gut’ and ‘shiver the ribs.’”
— Betsy Sholl

Praise for Death of a Ventriloquist

“Whether he’s overhearing a conversation in a tavern or the music stuck in his head, Fay-LeBlanc uses his ventriloquist to raise important questions about how we perform ourselves through language. The tension thatpermeates his poetry—what is seen and unseen, said and eavesdropped, true and trickery—culminates in a debut that rings out long after Fay-LeBlanc’s lips stop moving.”—Publishers Weekly starred review

Death of a Ventriloquist (Vassar Miller Prize in Poetry #19) (Paperback)