Print: A Bookstore is proud to be working with local author, Brandon Ying Kit Boey, in support of his debut novel, Karma of the Sun.

All copies will be signed by the author and can be personalized—make sure to include any requests in the order comments during checkout! 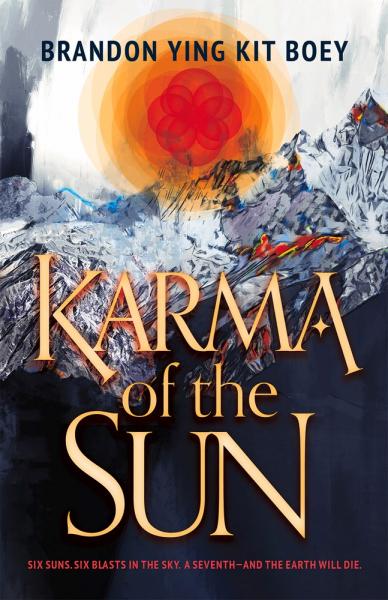 Six suns, six blasts in the sky; a seventh one, and the earth will die.

In the isolation of the Himalayas, the snows still fall, but they are tinged with the ash of a nuclear winter; the winds still blow, but they wail with the cries of ghosts. The seventh and final blast is near. As the world heaves its final breaths, the people of the Tibetan plateau—civilization’s final survivors—are haunted by spirits and terrorized by warlords. Though the last of the seven prophesied cataclysms is at hand, young Karma searches for a father who disappeared ten years earlier, presumed dead.

Driven by a yearning to see his father again before the end, and called by an eerie horn unheard by anyone else, Karma forges into the Himalayas and discovers that his father’s disappearance may be linked to a mystical mountain said to connect the physical world with the spirit lands—and a possible way to save their doomed future.

For readers who enjoy Station Eleven by Emily St. John Mandel, The Book of M by Peng Shepherd, The Fifth Season by N. K. Jemisin, The Buried Giant by Kazuo Ishiguro, and The Children of Men by P. D. James.

Brandon Ying Kit Boey writes speculative fiction and poetry. His work has been described as literary and atmospheric, often drawing from Asian cosmology and fantasy. The son of an oil engineer, he grew up moving frequently, never staying in the same place for more than three years. Themes of time and space, and the malleability of both, feature prominently as he has described the attempt always “to build a bridge” that can seemingly never be, over an expanse that might otherwise never be crossed. His poems have been published in literary journals and anthologies, and he is also a writer of plays and short stories. Karma of the Sun is his first novel. When not at work on his next book, he can be found wandering the backyard woods in his home of Maine or the shelves of his library. Follow him at: Instagram @boeybooks, Twitter @BrandonYKBoey, or www.BrandonYingKitBoey.com.

Advanced Praise for Karma of the Sun

★ “Fans of a post-apocalyptic world that is not a crushingly dystopian one should check this one out.”
—Booklist, starred review

"A hero's journey for the end of the world, Karma of the Sun is a must-read for anyone reckoning with where we are now and where we will go next."
—Erin Swan, author of Walk the Vanished Earth

"Part journey into the mystical, part adventure in a faraway world, Karma of the Sun deftly moves through places and among characters as it transports the reader again and again."
—Eric Barnes, author of The City Where We Once Lived

Karma of the Sun (Hardcover)